April Fool’s Day was something that I liked to have fun with on Radio Free Charleston. For this special day in 2011 I finally managed to pull off a joke that I’d wanted to do for years. The truth is that I had already made this joke before, in the middle of Summer with episode 78, a couple of years earlier, only this time I laid it on a bit thicker and made it happen on the right day.  Actually we tried this joke in 2008 on our first April Fool’s Day show too, but for that one we only went to Huntington.

In episode 78 we shot our host segments overlooking Pittsburgh, but said that we were looking at the Charleston skyline from a barely-visted spot in the hills of the West Side. With episode 125, we claimed to be back at the West Side, only this time I said that we were in the backyard of Roger Bartfast, an eccentric artist who had created an amazing replica of The National Mall in Washington D.C. “using miniatures, forced perspective, and kinetic sculpture.”

Of course, we actually shot the host segments at the real National Mall. We had even more total BS in this episode: Pepper Fandango let us use her music video for “Shelter for Wayward Girls” that had her playing banjo naked in the bathtub. You couldn’t see anything in the original video, the banjo being rather a sizable instrument, but we stuck in big black censorship bars to make the video look more explicit than it really was. The bars get more insane as the video progresses.

I also created a music video for the Mother Nang song, “Peel,” which I announced was a big-budget motion-capture piece directed by Robert Zemeckis. In truth, it was just a group of action figures posed playing instruments, while the camera moved around them. Then I stuck in psychedelic backgrounds using sloppy chroma key effects. 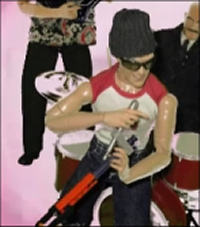 This was obviously a joke, and of course the band was in on it. However it flew over the head of one local musician who to this day thinks I need to take the time to properly animate the figures because he didn’t get the joke. Coincidentally, no effort was made to make the figures correspond to way the band members really looked. For instance I had a Jesse Ventura figure playing Brian Young’s drums, Jack Bauer’s figure stood in for Jay Lukens, and Deron Sodaro was portrayed by a GI Joe Land Adventurer.

However, the way I dressed the random figure that represented lead singer Spencer Elliott made him look like a pretty accurate representation of Spencer.  In that instance the joke was on me. The part of Spencer was played by a talking R. Lee Ermy action figure that would spontaneously erupt with a string of obscenities when touched.

Also in this special episode was footage of Adrian DeQuiros busking on Capitol Street, a short Kitty Killton film by Scott Elkins and Frank Panucci’s cartoon adventures of Charlie Manson. I also have a short video that shows how to get to Roger Bartfasts’s “World of Washington.”

You can read the original, kayfabe, production notes HERE. This is one of my favorite episodes of Radio Free Charleston.