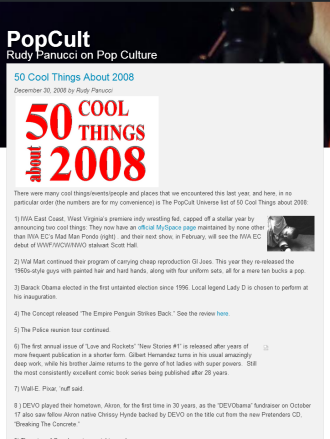 Looking Into The Past

I’ve been writing PopCult for almost twelve and a half years now, and I try not to go back and dwell on past posts (largely because I hate to see how many typos I’ve missed along the way), but I also check my reader stats once in a while, and I noticed something a bit strange of late. One post that I wrote back in December, 2008, looking back on “50 Cool Things” that happened that year, has been getting a lot of hits lately.

I mean, it’s getting a ridiculous number of hits for a post that’s over nine years old. Some days over the last couple of weeks it’s been read more than the new post that was published that day. My guess is that it’s just people searching for posts about 2018 and getting misdirected, but I have no real way of knowing why so many people were going back to read this one post. I decided to indulge my curiosity and went back to reread what I’d written about 2008, and a lot of it struck me as a bit remarkable (hence, these remarks).

This post is a bit of a time capsule of how things were back in 2008, and it says a lot about how much things have changed and how much they’ve stayed the same.

First of all, I was way more optimistic in 2008 than I am now. I think most of this has to do with the political climate. Back then we had just elected a dignified, honorable and competent man to lead our country. Now we don’t have one of those in charge. Charleston seemed to be in better shape back then. I gave shout outs to a lot of great businesses and organizations that are no longer with us. But also several that still persevere. IWA East Coast Wrestling is still a going concern, but they don’t run as many shows as they used to. All Star Wrestling is still bringing top-notch wrestling shows to Southern West Virginia. CYAC is still kicking, even with the future of their home theater in doubt. The Bluegrass Kitchen is still serving up high-quality eats on Charleston’s East End. Kanawha Players survived a near-fatal brush with owning real estate, and is steadily building back their legacy.

The No Pants Players are mutating into “State 35” to keep supplying Charleston’s sketch comedy needs. Graziano’s is still the best pizza in town. Taylor Books and The Empty Glass maintain their positions as Charleston institutions. And Lady D is still performing and recently had a show at The Bakery. Brian Hatcher is still writing and John Nelson is still selling music at Budget Tapes and Records.

We have lost a lot of cool stuff here in Charleston since I wrote that post. LiveMix Studio is no longer with us. Capitol Roasters, which I really liked, has been replaced by a beer and burrito place that has nothing I can eat or drink on their menu. WV Rockscene hasn’t been updated lately. The Book Exchange on the East End is not around anymore. The Vandalia Grille has gone under, and I have not yet tried its replacement establishment. In their places we do have some pretty cool new places and things: Sullivan’s Records, Kin Ship Goods, Elk City Records, The Oddbird Emporium, Starling’s, Moxxee and all sorts of new places that I’m too lazy to remember to mention, or that haven’t opened yet. Life goes on. User fees go up.

Local politicians continue to make poor decisions. The anti-Kanawha Boulevard forces even managed to win a major victory for Charleston’s seven bicyclists by reducing the Boulevard to two lanes near Patrick Street, creating one of the nastiest bottlenecks in the city during rush hour and forcing so many people onto I 64 that commute times out of the city have increased by twenty minutes to a half hour. Also, Shawnee Golf Course has been sacrificed for a multi-sports recreational facility that nobody local will use, and nobody in the region will want to visit.

However, the smoking ban in bars, which took effect in 2008, is still going strong, and my lungs thank Kanawha County’s Health Department for that. The bar scene itself has been hit hard by the mass exodus of young drinking peoples and a few high-profile crimes, but now we can breathe when we have to record a band for Radio Free Charleston. At least they got that one right.

I didn’t just talk about local stuff in this post, either. Pop culture had a lot going for it in 2008. Pixar was going strong. Love and Rockets had switched to their annual format (they switched back to more frequent publication in 2017). The Marvel Cinematic Universe grew out of the success of Iron Man, which I raved about. 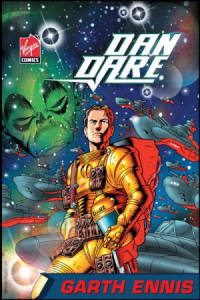 Everything didn’t click as well as I hoped. The Zeroids revival failed to make it past one comic book series, but Captain Action did manage a third run as a 12″ action figure, with more new stuff still in the pipeline.

Aqua Teen Hunger Force finally ended, but Squidbillies continues and Adult Swim found new hit shows with Rick and Morty and Mike Tyson Mysteries.  MEGA Bloks was bought up by Mattel and shut down their Pyrates and King Arthur lines.

And Dan Dare fizzled out when Virgin Comics went belly-up and has been gone long enough that there’s yet another new revival of this classic British comic book being published now.

Oh, and most of the local bands I mentioned by name broke up and a bunch of the musicians moved away. An alarming number of promising young musicians have left Charleston.

However, the thing that hit me upside the head while I was re-reading this post was actually two seemingly unrelated items, which I now know have a heck of a lot to do with each other. I mentioned a benefit show for my friend, Emily Haynes. Emily had been diagnosed with Myasthenia Gravis, and it hit her really hard. Longtime readers of PopCult know that I was recently diagnosed with MG, but compared to Emily’s case, mine is a walk in the park. I have an extremely mild case of this disease, and I hope that sometime this year I can hook up with Emily for an interview so that I can share a more accurate portrayal of Myasthenia Gravis with my readers.

I was completely unaware that I’d had MG since at least 2005. I didn’t realize that was what I had at the time, and I totally forgot about mentioning anything about it here in PopCult, but near the end of this year-in-review retrospective post I wrote, “one of the things that has sucked most for me in 2008 is this repetitive stress injury, or whatever it is, that has left my right hand virtually useless.”

It was not a repetitive stress injury, like I thought.

It was late Summer in 2008 when I discovered how weak my right hand had become. I went out to a bar in South Charleston to hear a band, and tried to shoot a game of pool for the first time in a long time. I discovered that I could not hold a pool cue well enough to make even one shot. I’d already adapted to periodic bouts of weakness in my hands, and learned to deal with occasional double vision, which I told people was probably related to diabetes (turns out it wasn’t). I’d managed work-arounds and was able to adapt and hide my issues from most people.

This was when I was putting in 80 hours a week as a caregiver for my uncle, and there was no time or money to go to a doctor.

It wasn’t until 2016 when I was finally diagnosed with Myasthenia Gravis, which I was already aware of only because of Emily. It never occured to me that I had the same disease as her, because, as I have explained, my case is so mild.

I’m on meds for it now and I’m doing great, physically. But it was just really wild to find this contemporaneous mention of my hand problems buried in the same post where I discussed the benefit show for Emily. By the time I was diagnosed with MG, I had convinced myself that I was in the early stages of Lou Gerhig’s Disease, so finding out what was wrong was actually a great thing for me. Finding this mention from way back then was sort of an extra missing piece of the puzzle.

However, aside from all that, which is very interesting to me, I still can’t figure out why so many people are going back to read that damned post.

Meanwhile, On The AIR 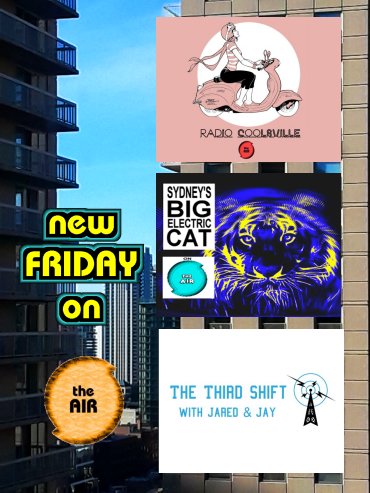 Did you know that PopCult has a sister internet radio station? If not, welcome to your first visit to PopCult. You can hear The AIR at the website, or on this virtual radio machine…

Friday sees a full schedule of new and encore programming. At 7 AM you can hear this week’s new episode of Radio Free Charleston International. 9 PM brings you encores of the latest editions of Word Association with Lee & Rudy and Life Speaks to Michele Zirkle. At 10 PM we present this week’s The Best of The Real with Mark Wolfe, which this week brings you a classic conversation with Chuck Hamsher of The Purple Moon.

At 11 AM we bid adieu to Dexter Checkers as he takes Ska Madness on hiatus with a mini-marathon of skank. Ska fans will want to return at midnight for seven more hours of Ska Madness.

At 3 PM, on a brand-new episode of Sydney’s Big Electric Cat, Sydney Fileen treats us to 120 minutes of New Wave extended dance mixes. Check out the playlist here…

…all New Wave classics and all with extra-long 12″ dance mixes.

Stick around in the evening for encores of Beatles Blast, Harrah’s Hard & Heavy and both RFC shows. At 9 PM, in the midst of all this, you can tune in for a full hour of The Third Shift with Jay and Jarod.

That’s what’s on The AIR Friday, and that is this week’s PopCulteer. Check back because we have a fresh post every day.