Getting The Marx Brothers 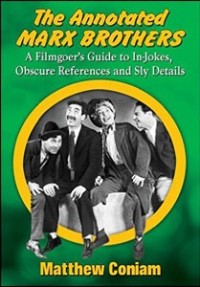 I don’t often write a review of a book before I’ve finished it. In fact, I’ve never done that before. However, this is a special case and a special book and I wanted to tell you about it before it goes out of print, or something. British author, Matthew Coniam, has compiled a definitive guide to every in-joke, topical reference and literary gag in each of the Marx Brothers’ movies.

One of the problems that any contemporary viewer has watching these brilliant comedians is that they created their best work seven-to-nine decades ago. While the universal goofy comedy lives on for everyone to see, the sly pop culture riffs and downright wicked political jabs can fly over the heads of modern audiences. Some people don’t realize that The Marx Brothers delivered their lines in a rapid-fire manner that makes the guys at MST3K look lazy in comparison. This book allows you to understand every joke, and even identifies a few that you may not have realized were jokes to begin with.

The Marx Brothers rank up there with The Beatles, Jack Kirby and Frank Zappa as major influences in my life, but I haven’t written much about books on The Marx Brothers here in PopCult because I’d read most of the really good ones years before I started writing this blog. In fact, I’m pretty sure that I read my first book about The Marx Brothers before this book’s author, Coniam, was born. That’s why it’s such a surprise and delight to find a book so loaded with tons of information that I didn’t already know from reading previous books.

Coniam does a great job setting the stage with an introduction that explains his connection to The Marx Brothers and his reasons for compiling this extensively-researched tome. He is British and this book does skew a tad Euro-centric.  It’s particularly noticeable when he’s dissecting a baseball reference and we are reminded that our national pastime is as alien to the Brits as Cricket is to us in the US. Coniam is very mindful of the source material and I think this gives him an even better perspective when it comes to sorting out and untangling the rapid-fire one-liners and asides.

We go to the cover copy:

Have you ever watched a Marx Brothers film and wondered what “habeas Irish rose” is? What is the trial of Mary Dugan with sound? What is a college widow? When exactly did Don Ameche invent the telephone? Their films are full of such in-jokes and obscure theatrical, literary and topical references that can baffle modern audiences.

In this viewer’s guide to the Marx Brothers you will find the answer to such mysteries, along with an exhaustive compilation of background information, obscure trivia and even the occasional busted myth. Each of the Marx Brothers’ 13 films is covered by a running commentary, with points in the film discussed as they appear. Each reference is listed by its running time, with time code given for both PAL and NTSC DVD.

An introduction for neophytes and a resource for fanatics, this book is a travel guide to the rambling landscape of these remarkable comedies.

The reason that I haven’t finished reading this book yet is because of the brilliant way that it’s organized. There is a chapter devoted to each of the Marx Brothers’ movies. The book is designed so that you can follow along (there are even timecodes that correlate to DVD releases), and look up each joke as it shows up in the film, or you can read each chapter before or after you see the movie on which it is based.

So I haven’t finished the book because I intend to use it to enhance my viewing experience the next time I indulge in the Brothers Marx. This book is going to live under my televions remotes for the foreseeable future. It’s loaded with great information and can give readers a fresh perspective and new appreciation of the brilliance of Groucho, Chico, Harpo and Zeppo.With my eyes opened anew to the jokes in Animal Crackers, A Night At The Opera, and Duck Soup, I’m hoping it’ll be a bit like seeing them for the first time again.

I would imagine that this book will eventually be used as the textbook for any college courses being taught that will analyze The Marx Brothers (Don’t laugh. Over thirty years ago I took a class on “The Twilight Zone,” taught by Danny Boyd at WVSU). In fact, the publisher, McFarland, specializes in academic books, so that may be the intention, and the reason for the mile-long title.

A special PopCult tip of the fedora to Mark Evanier who wrote about this book a couple of weeks ago. His recommendation is what made me decide to pick it up. Matthew Coniam is the author of the weblog, The Marx Brothers Council of Britain, and has contributed to numerous books, magazines, journals and websites in Britain and America. He lives in Bath, England.