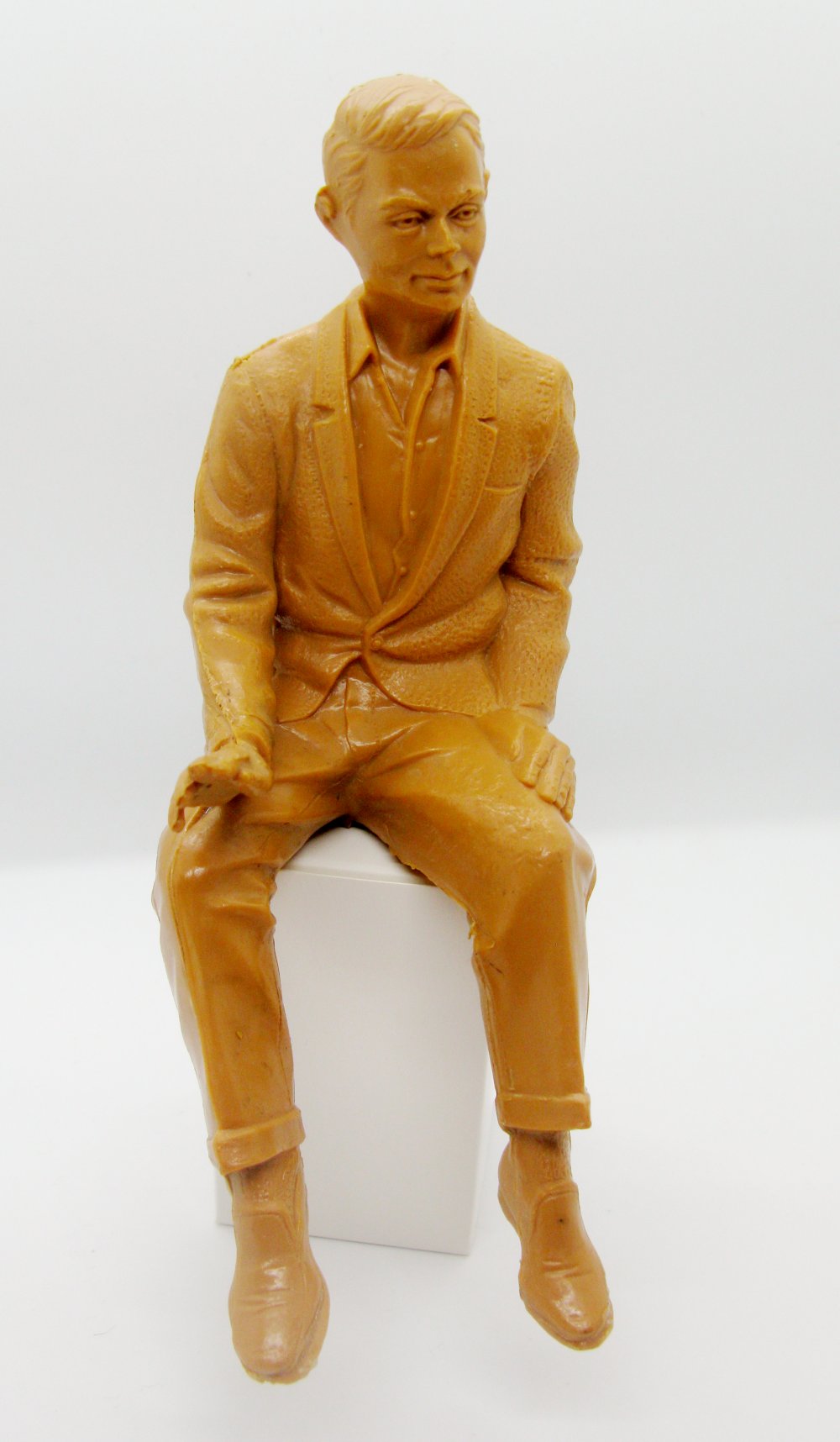 UPDATE: The Mystery has been solved, less than an hour after this was posted. Read the answer at the bottom of this post!

Usually here in PopCult, I’m the person telling you all about cool toys and figures and things, and I usually have all the details needed to enlighten you.

This time, I’m the one needing enlightened. I need your help identifying this figure I found on a recent trip. I have been researching this for weeks, and while I came up with a few leads, none of them have panned out.

Let me tell you how this mystery guy showed up in my collection: On the way back from WonderFest early in June, we stopped at the Peddler’s Mall in Winchester, Kentucky. Peddler’s Mall is a small chain of antique malls that have proven to be rich hunting grounds for vintage toys, comics and trading cards. While speed-shopping through the place (Mrs. PopCulteer was in the car, enjoying the air conditioning), I found this guy in one of the booths.

I was intrigued, but probably picked him and put him back three or four times before I decided that he was too interesting to pass up at $8.99. 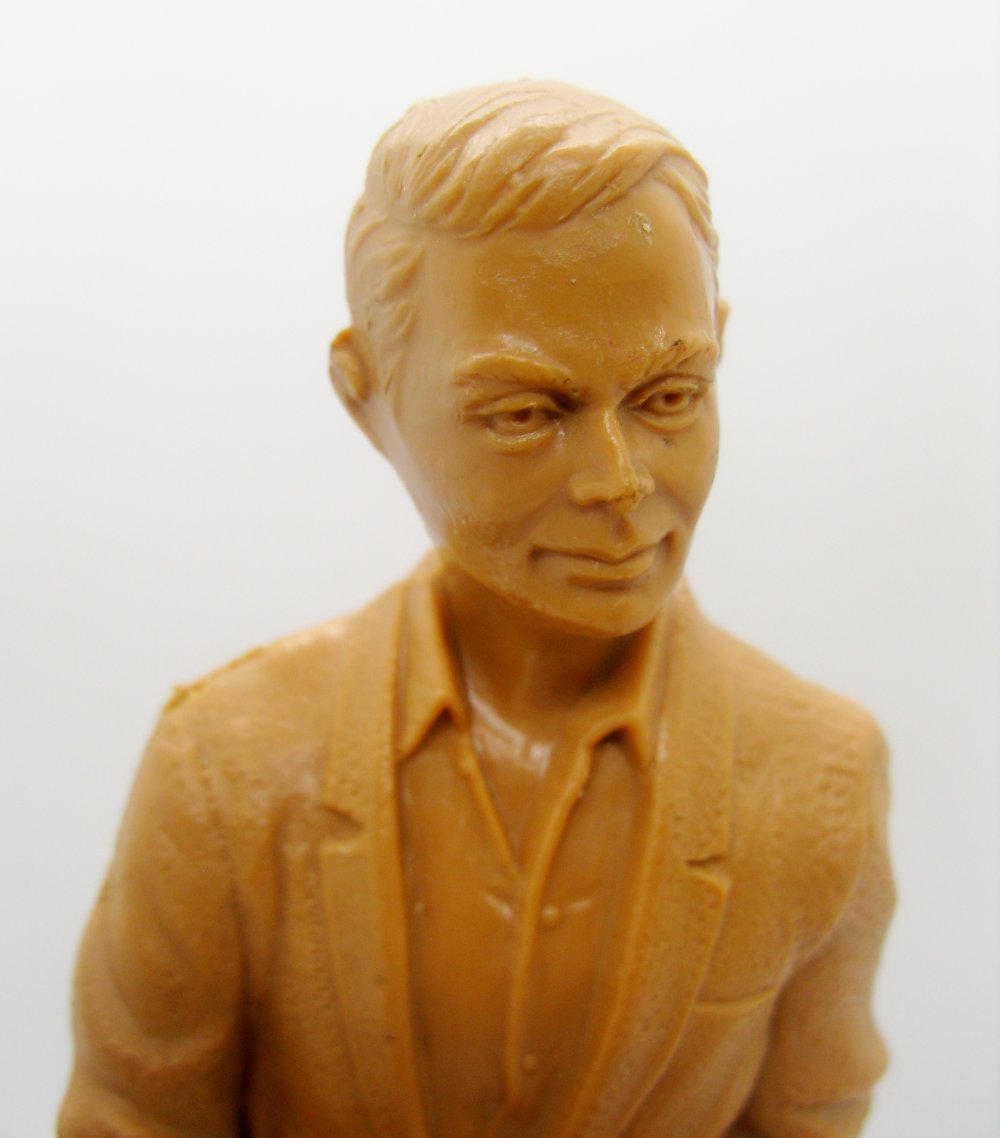 Due to the construction type, material and sculpting quality, I would say he probably dates back to the late 1950s/early 1960s.

The tag around his neck identified him as “Decades Vintage, Vintage Plastic Toy.”

Not a lot to work with there.

My first thought was that he might be a Marx Toy, but the figure has no markings at all, anywhere. 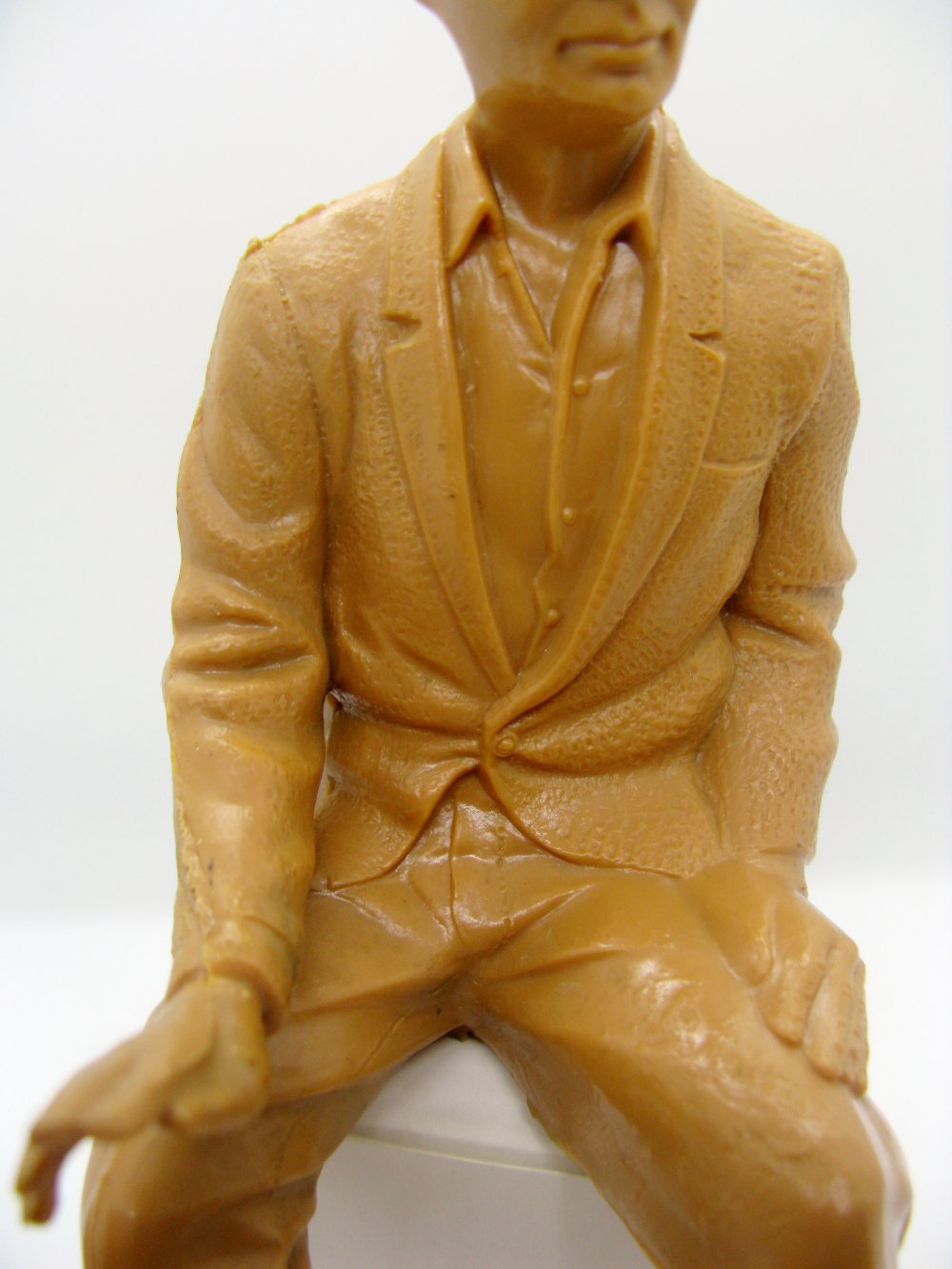 Let me describe him as objectively as possible: The figure appears to be 1/8 or 1/9 scale in size. It is a seated figure of a middle-aged man, dressed in what appears to be mid-century casual attire, with a suit jacket, no tie and his shirt unbuttoned.  His pants are cuffed. His shoes are slip-on loafers. In his seated position, his feet are pointed down, indicating that he was seated in a taller chair, or a rocking chair, or possibly bleachers or as a passenger in a vehicle.  He is not posed as though he is driving. One hand is raised slightly off his leg, while the other rests on his other thigh. He is seated in a casual manner, with one leg arched outward. 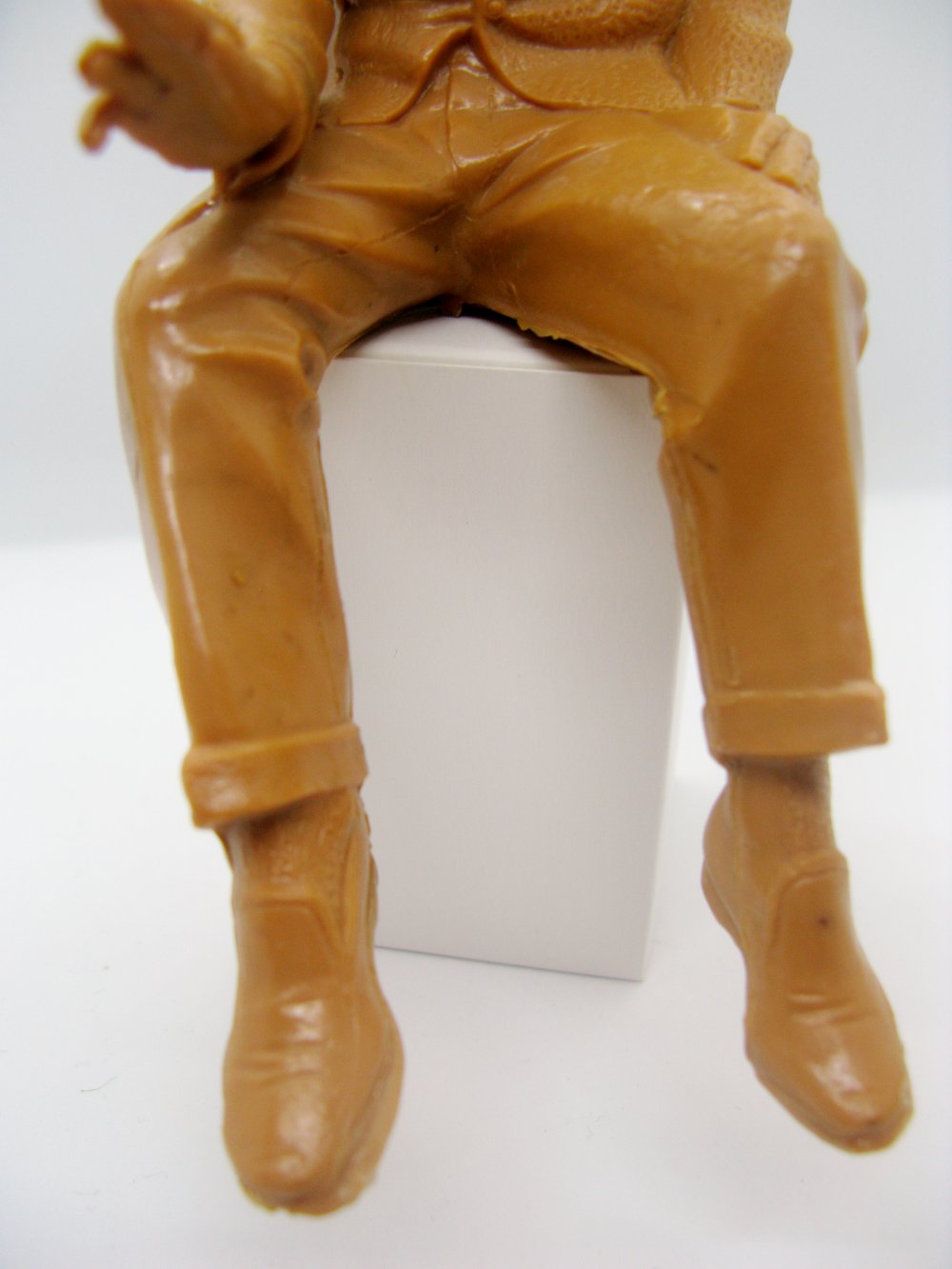 The figure is molded in a dark tan/light brown styrene plastic.

He is hollow, with two-piece (front and back) construction. The Sculpting quality is quite good, on par with a Marx sculpt, but the assembly is rather sloppy, with gaps in the seams and sloppy glue application.

The detail on the sculpting goes to great lengths to depict fabric textures, but the figure is completely smooth on his rear end and the backs of his legs, indicating that he was meant to be paired with a seat of some kind, possibly a sofa or a rocking chair.

His two-piece construction reminded me of a Hartland figure, but those figures are considerably smaller, more crudely sculpted, and are usually painted.

This guy shows no sign of ever having been painted. The pigment used on him is very close to what Marx used on a few solid plastic figures, and the quality of sculpting is on par with Marx, but the complete absence of any manufacturer marks tells me it isn’t a Marx figure, or at least not a Marx figure that was made for sale to the general public. 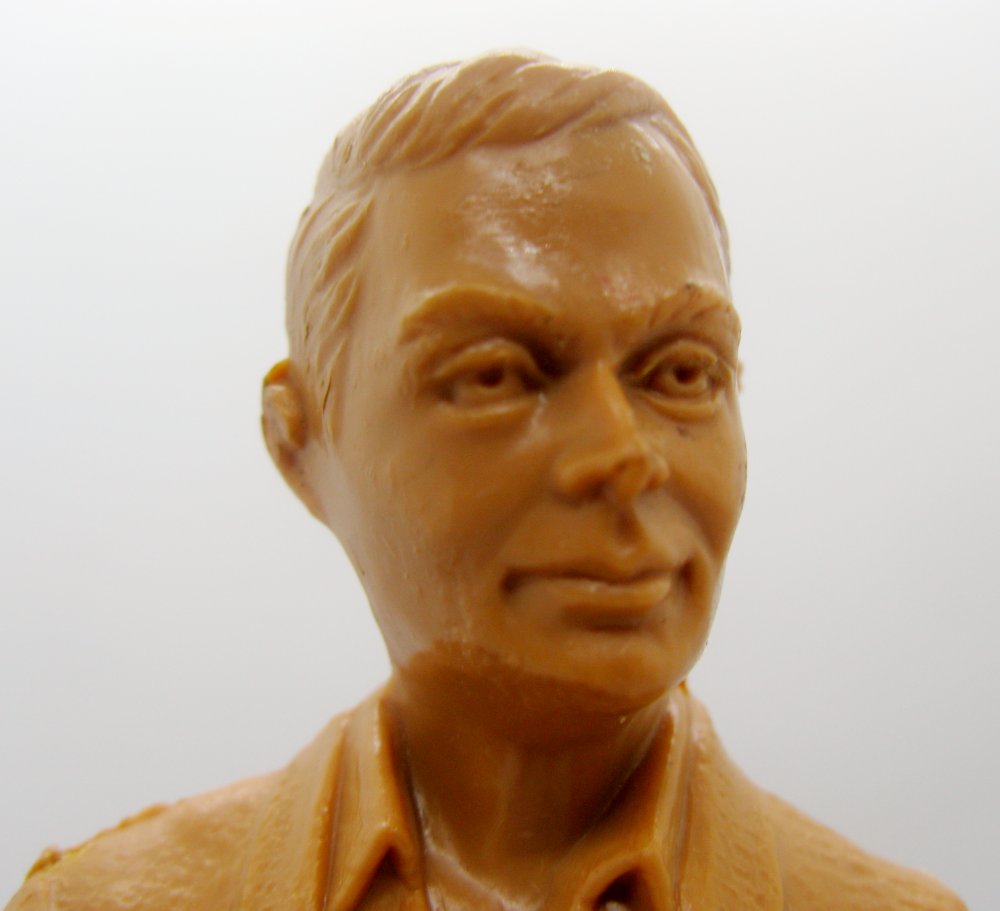 I have not been able to identify the face. I think he bears a slight resemblance to the actor, Robert Young, the star of the sitcom, Father Knows Best and the medical drama, Marcus Welby, M.D., but the figure is not dressed the way either of those characters would have been depicted in merchandising at the times they were on the air.

He may very well be another celebrity of the day, or he could be a politician, preacher,coach or retired athlete, or historical figure. However, the lack of a tie is a curious omission if that last one were the case. 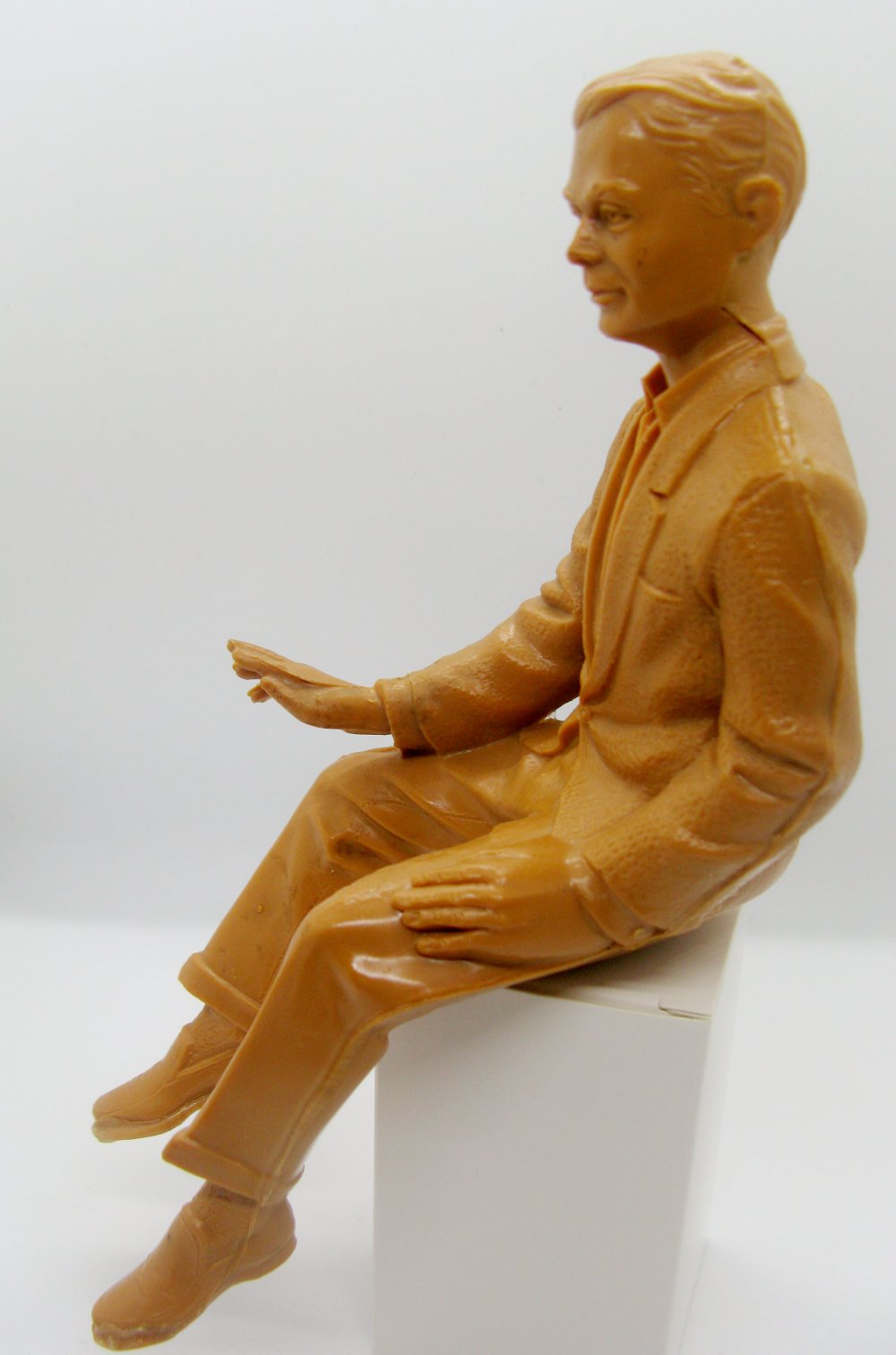 At the Marx Toy Convention I showed a photo of him around, and nobody recognized him. Mark Hegeman, who knows way more about vintage toys that I do was stumped, but suggested he might be part of a model kit. Aurora made a model kit of President Kennedy in a rocking chair, but Mark looked him up on Google, and the Aurora figural kits had many more pieces and were molded in different-colored plastic, plus this guy doesn’t look like Kennedy. However, there is a possibility that he might be a refugee from another company’s model kit. I haven’t ruled it out.

In fact, I haven’t ruled out a lot yet. 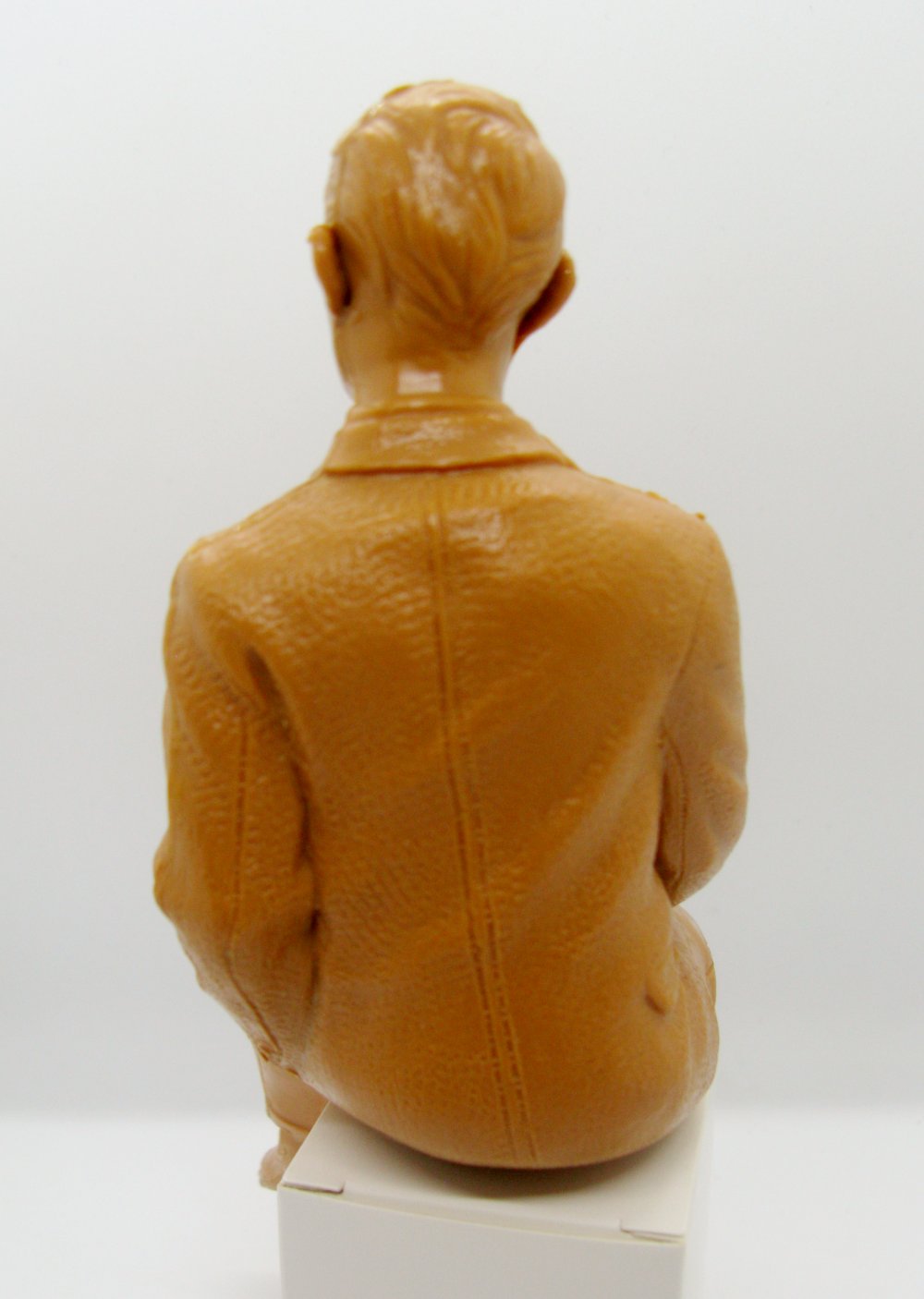 He could be an advertising figure that was attached to a store display. He might have been part of a large-scale dollhouse playset. It’s possible that this was a very small-scale production for a private display, possibly to sell furniture or something.  He could also be a passenger in a remote-control car or plane. He might be an historical figure of some sort, possibly part of a set that came seated on a display. He might even be a miniature version of a statue of a famous author, separated from his base.

He does not show signs of being permanently attached to any base.

So I am stumped. I’m including plenty of pictures here, and you can click on them for a larger version. If you can help me solve the mystery, please leave a comment. I’d really like to know who he is.

More photos after the jump… 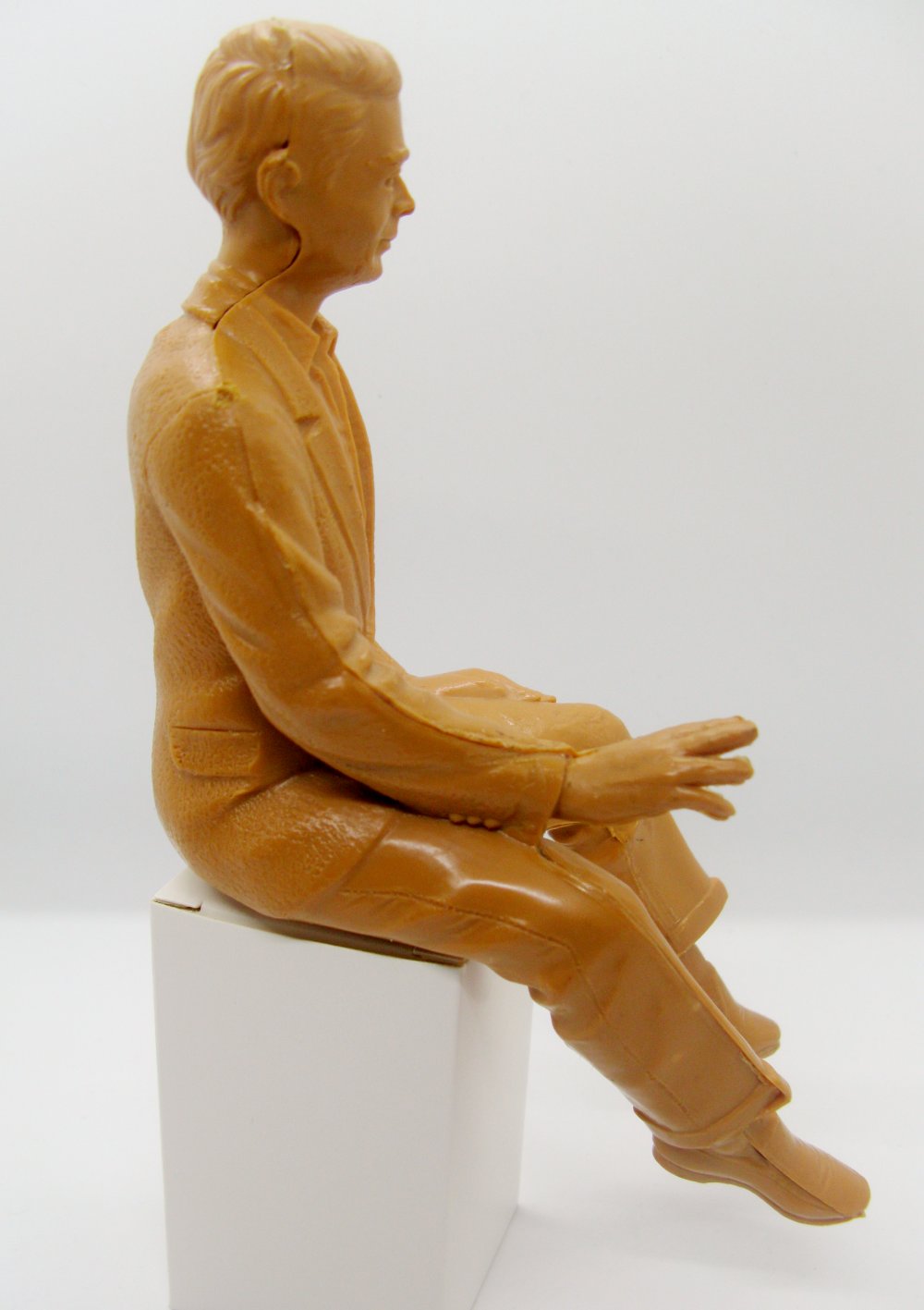 Here you can see some of the sloppy seam work. 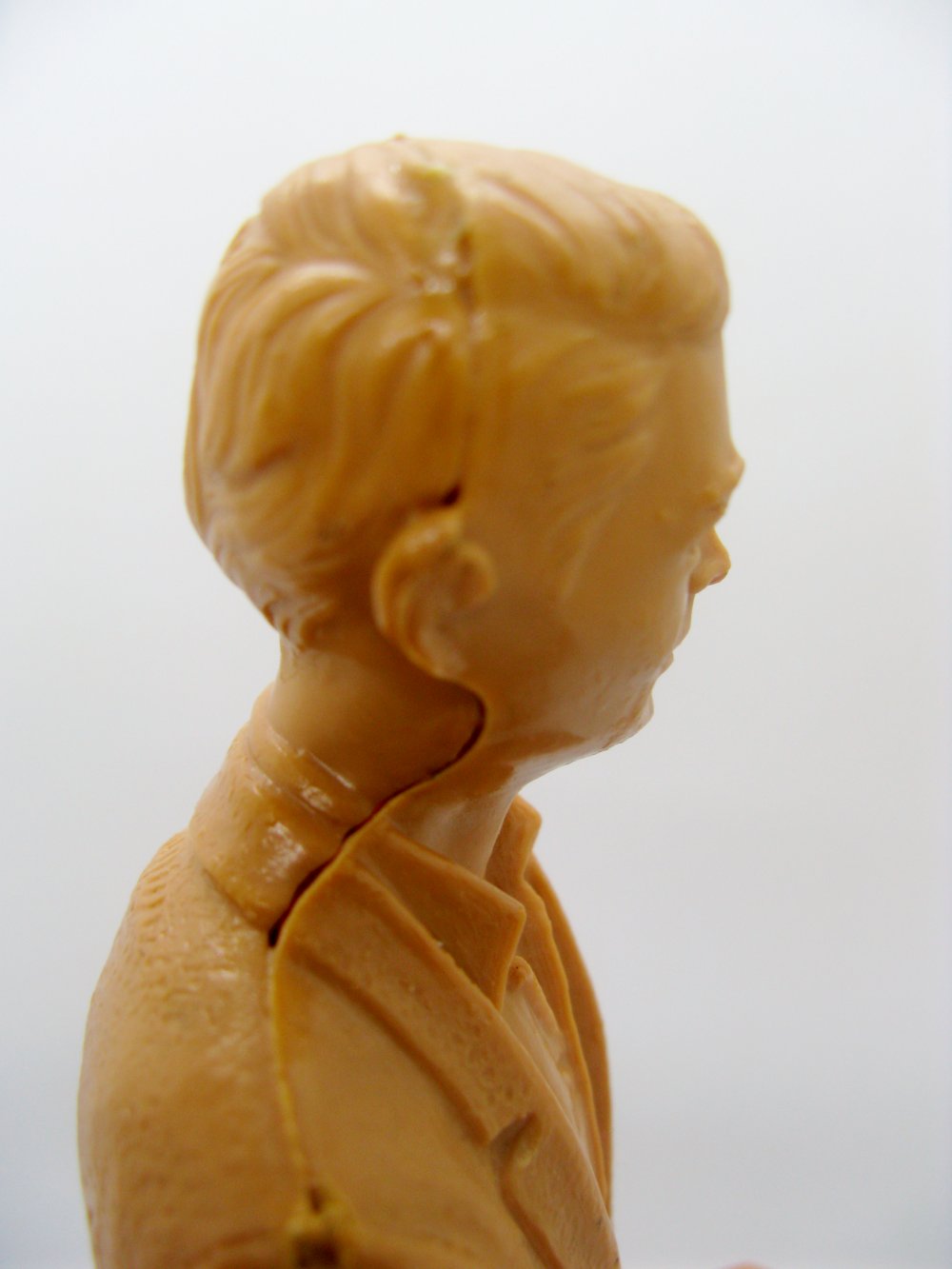 Curiously poor construction considering the high quality of the sculpt. 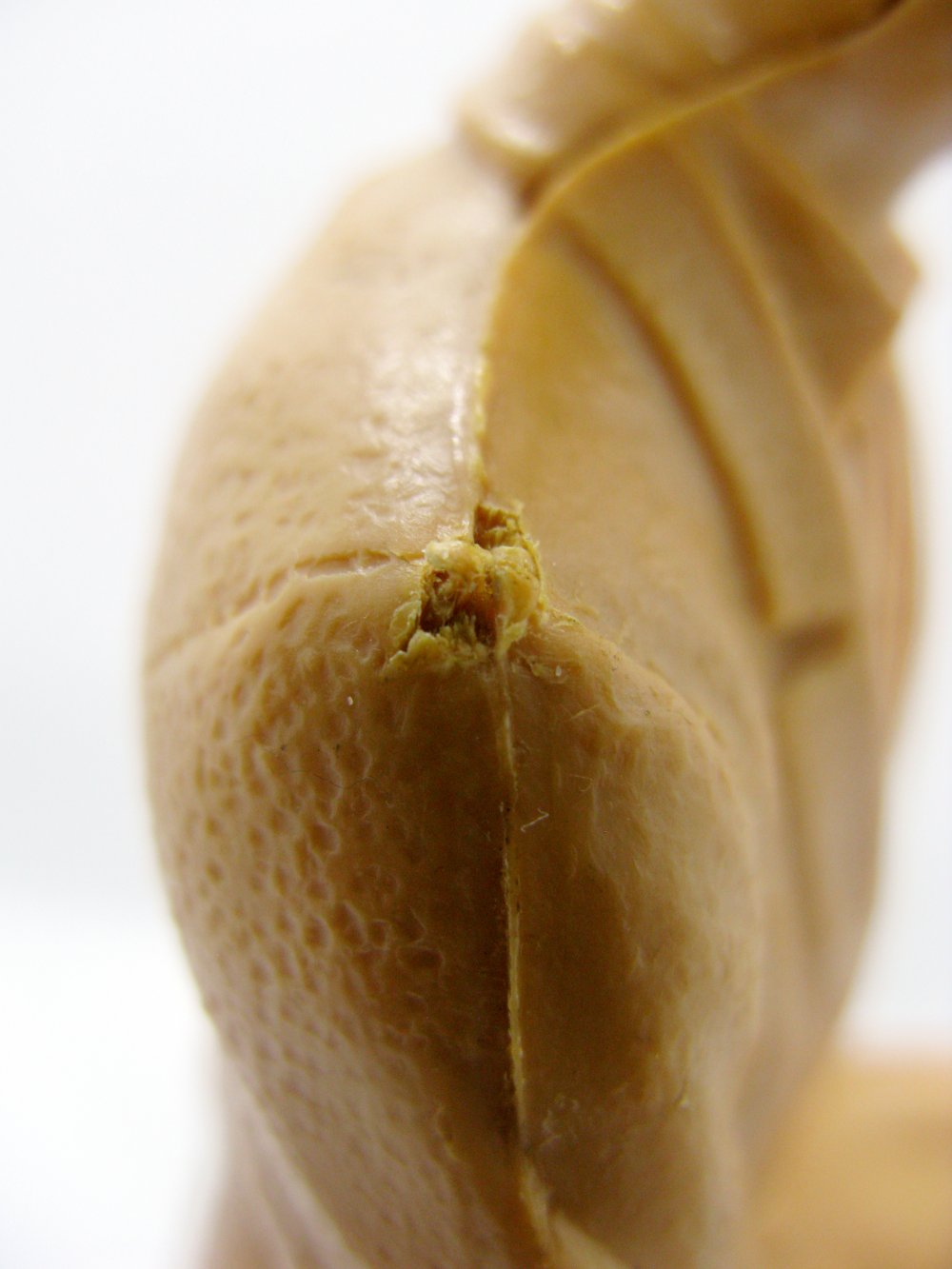 I do have to consider the possibility that the figure had been damaged, and then glued back together. 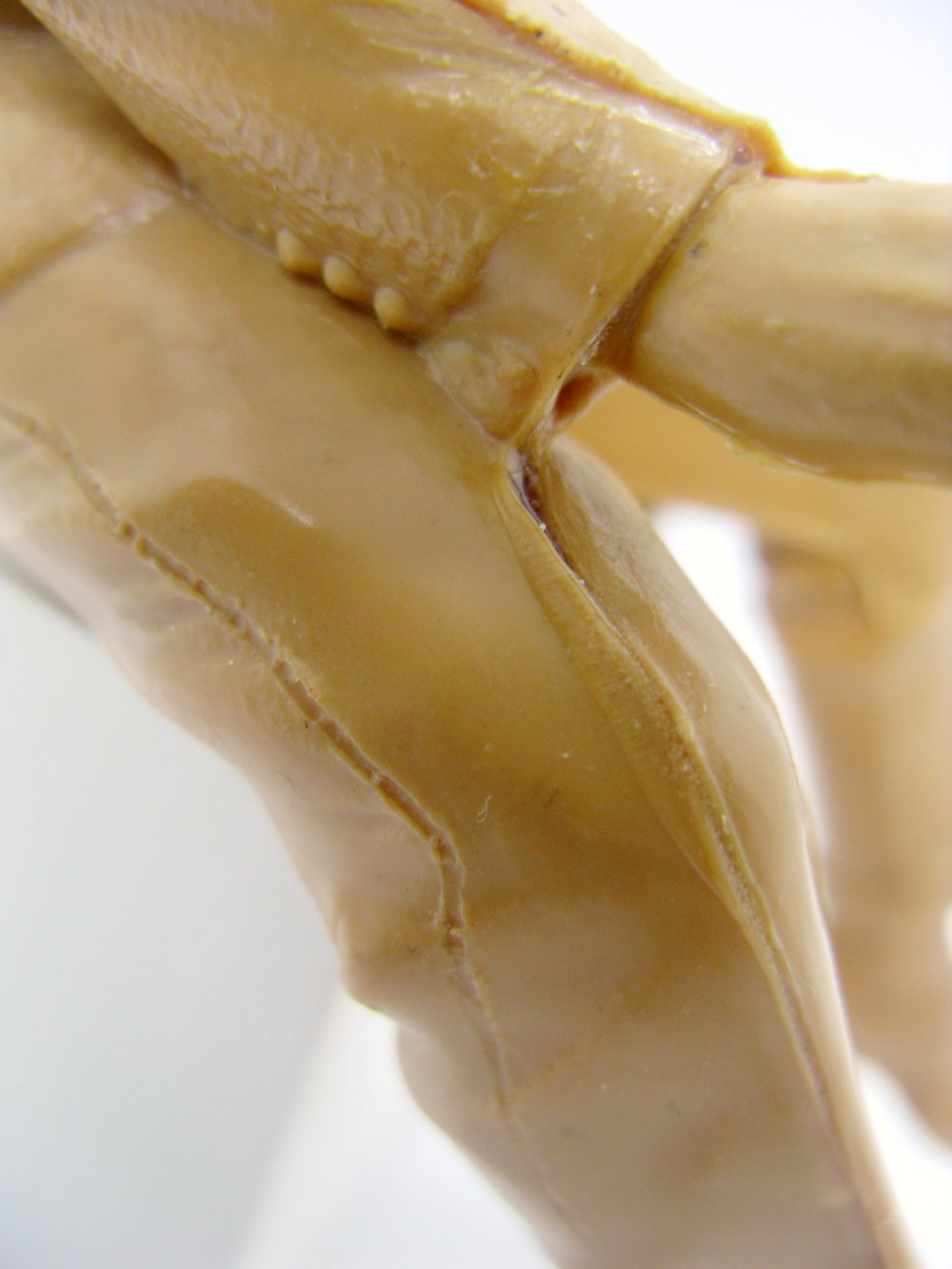 This lets you see the quality of the sculpting–that seam on the side of the pants is sculpted–and the really sloppy actual seam of the figure, going down the front of the leg, coming out of the sleeve. 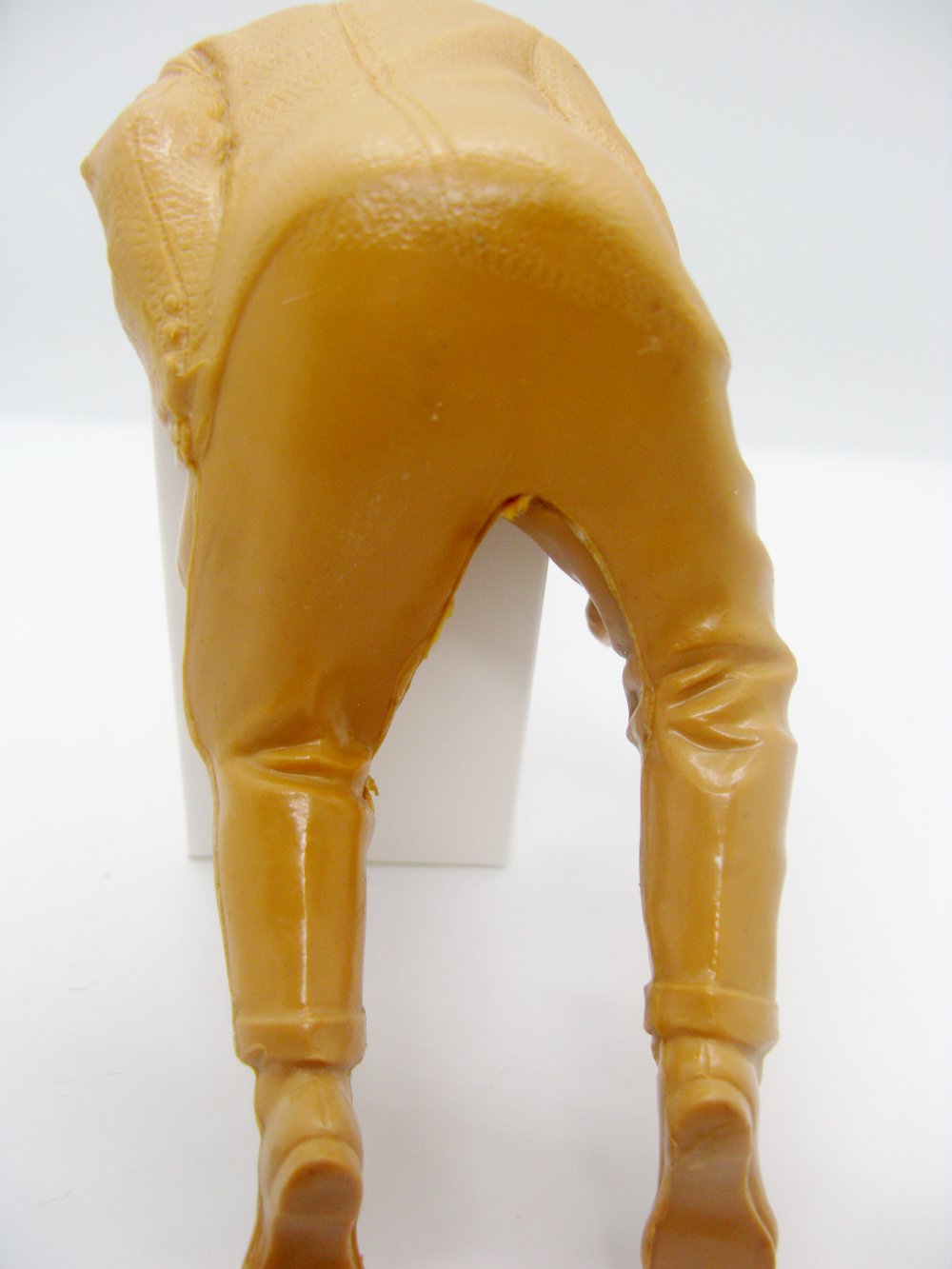 We have to share the indignity of our mystery man, presenting rearly, so you can see the smoothness of his butt. 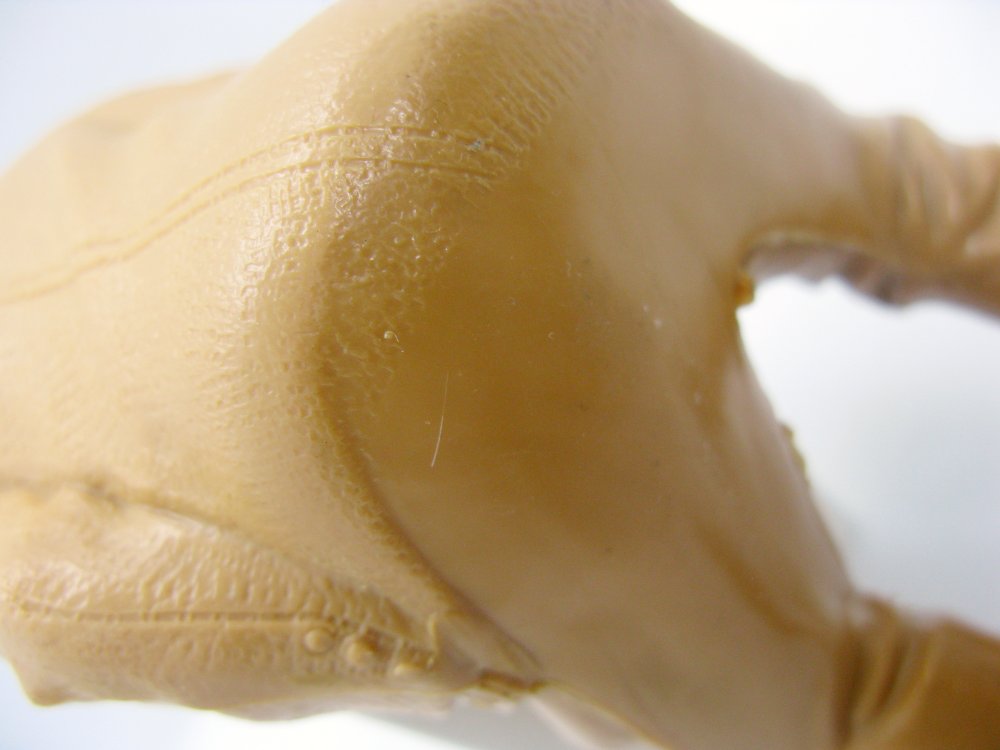 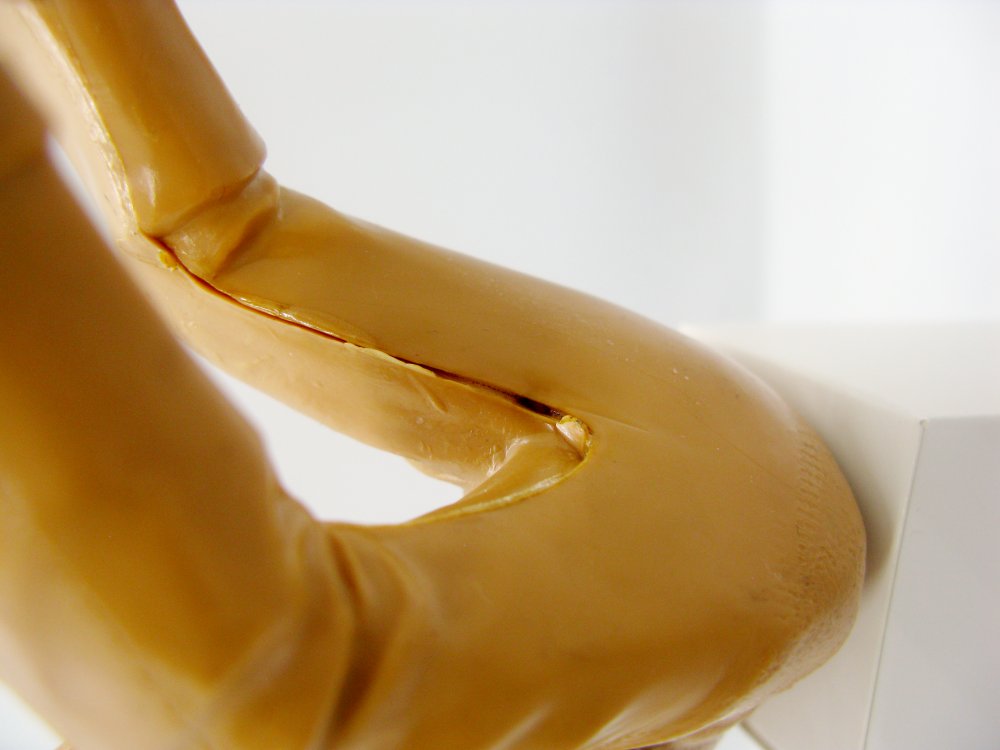 Since we’ve thrown dignity out the window, just look at that sloppy crotch assembly! 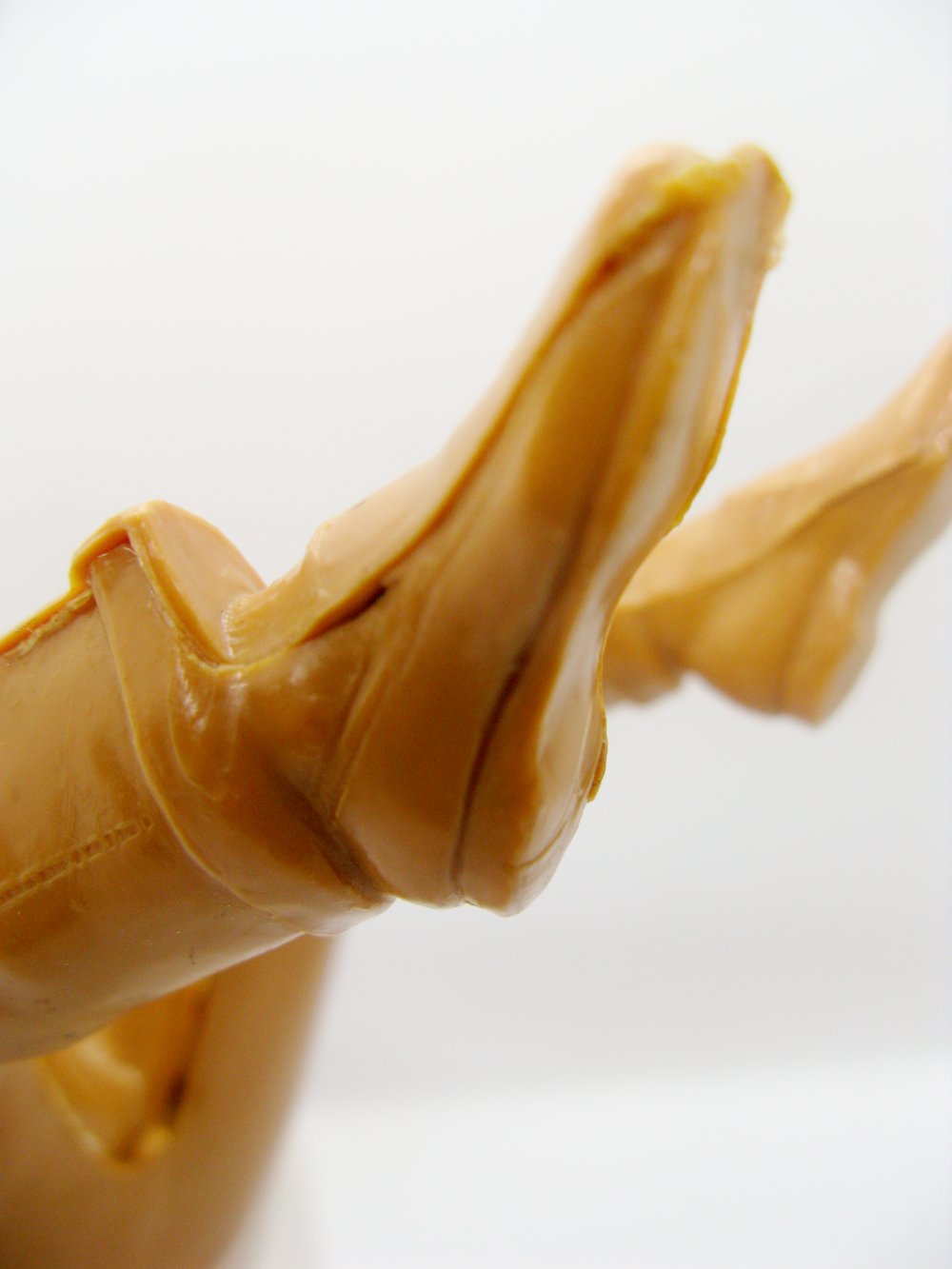 The choice of the seam location on the foot indicates that this might’ve been a rush job. 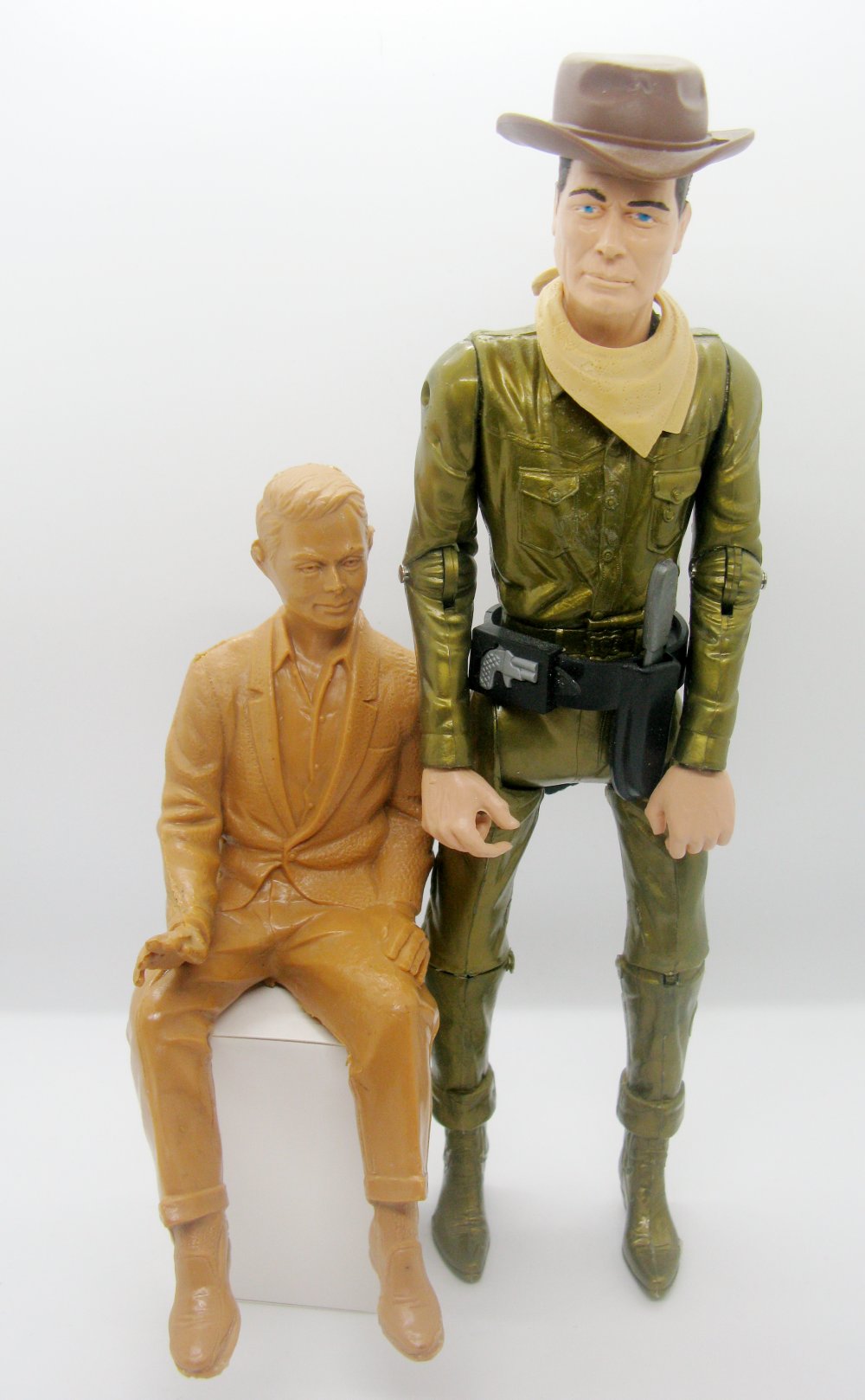 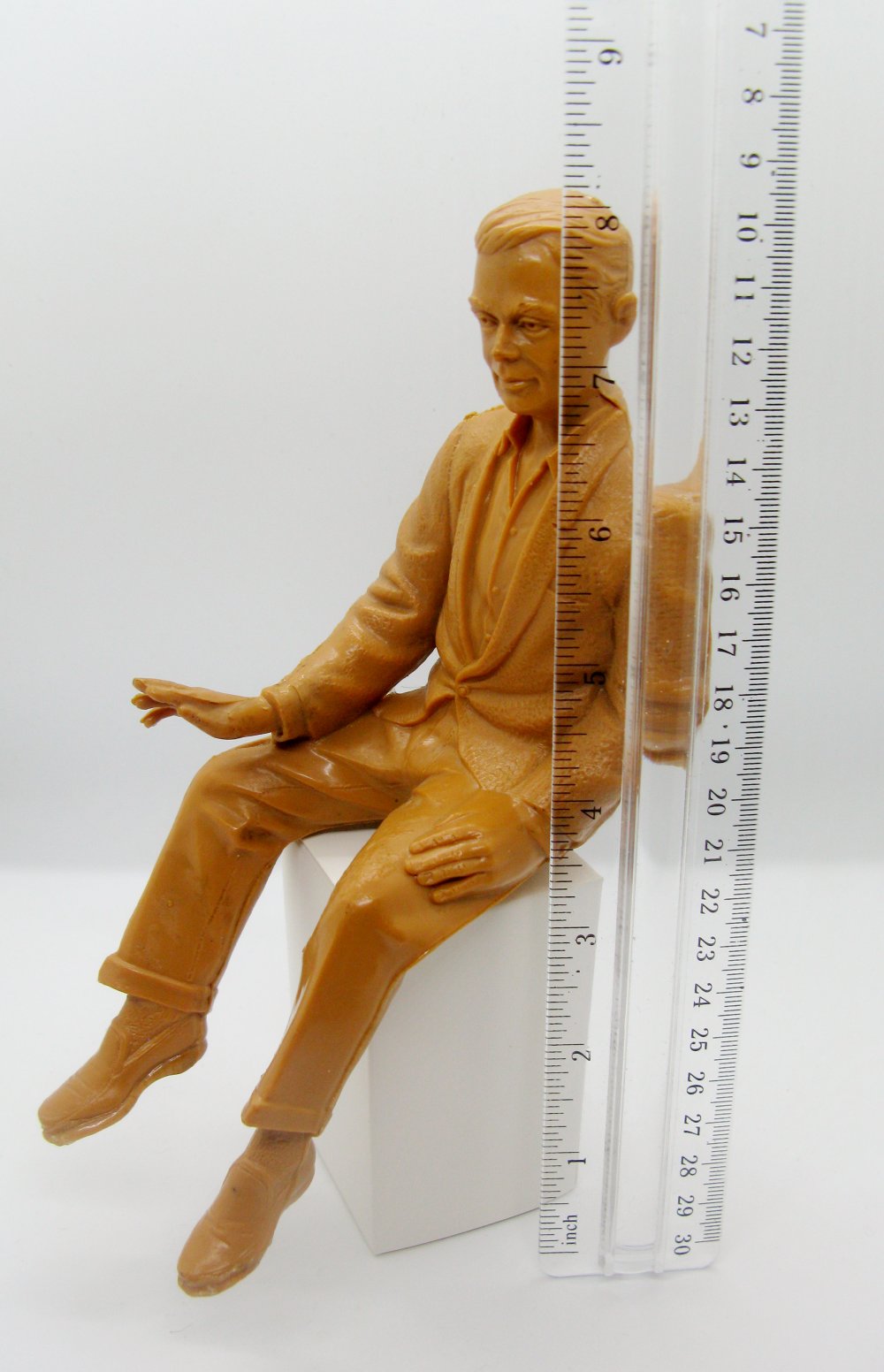 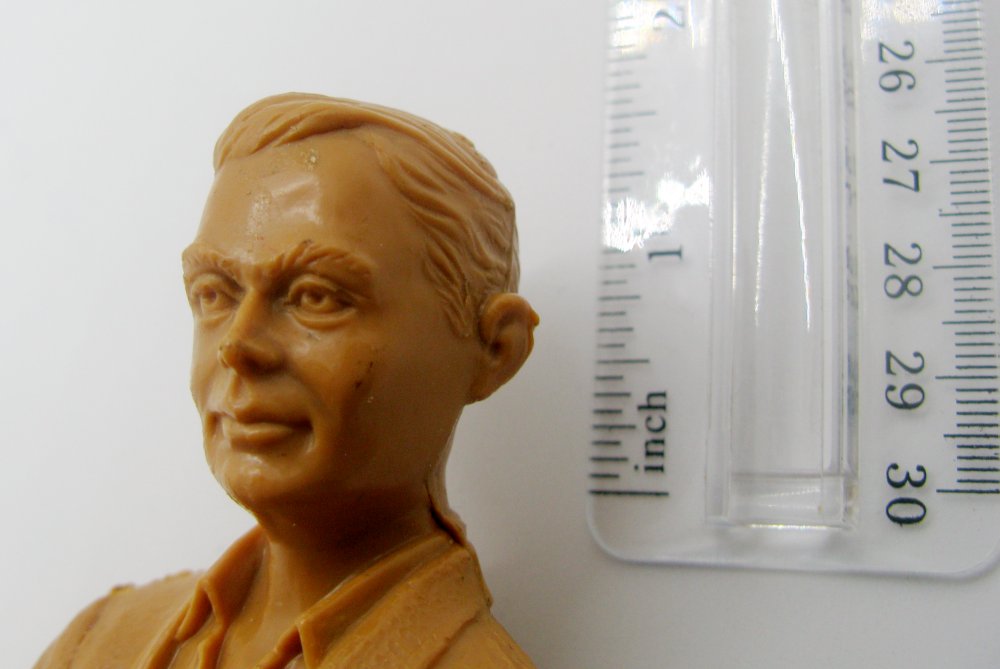 Another head shot, next to a ruler. 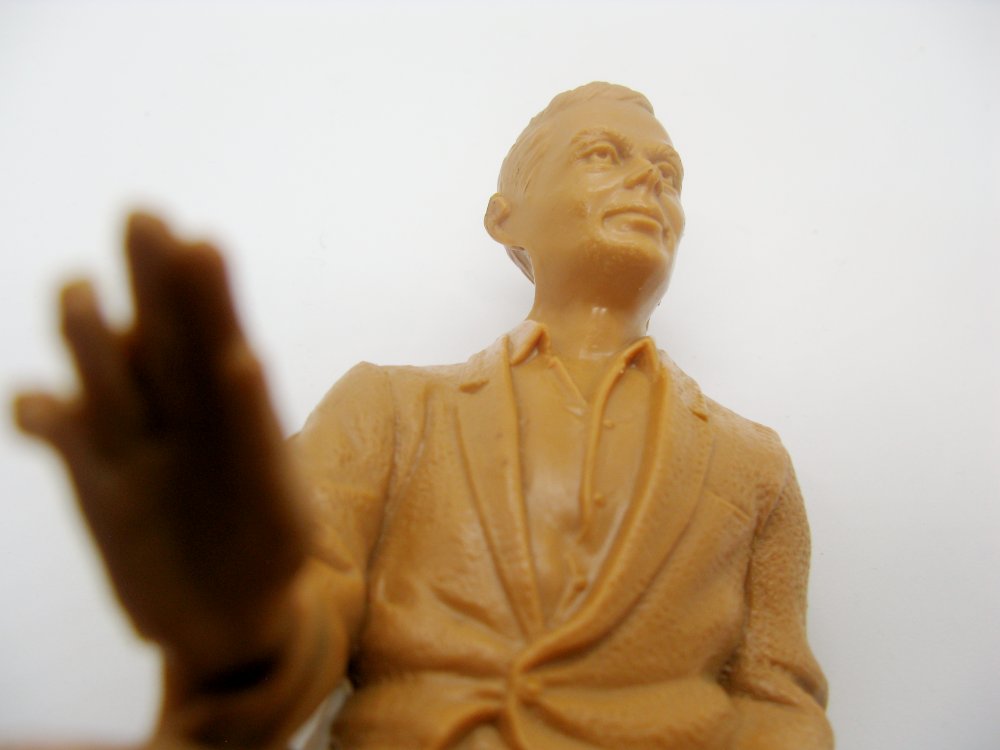 Finally, we have an artsy shot, just for the heck of it

If anybody out there instantly recognizes this guy, please leave a comment. This mystery is driving me crazy, and that’s a short trip.

Okay, aided by the much better photos posted here, none other than Mark Hegeman himself solved the mystery. As he said on Facebook, “Looking up Deluxe Reading giant Pontiac convertible…These are much better photos than you showed me at the show. They triggered some memories.”

So he is indeed driving a car, a large, wired-remote Pontiac, made in 1964 by Deluxe Reading, who owned Topper Toys, the company that made Johnny Lightning and Dawn Dolls. Officially it’s the “Crusader 101.”

Here are some photos Mark found to confirm this… 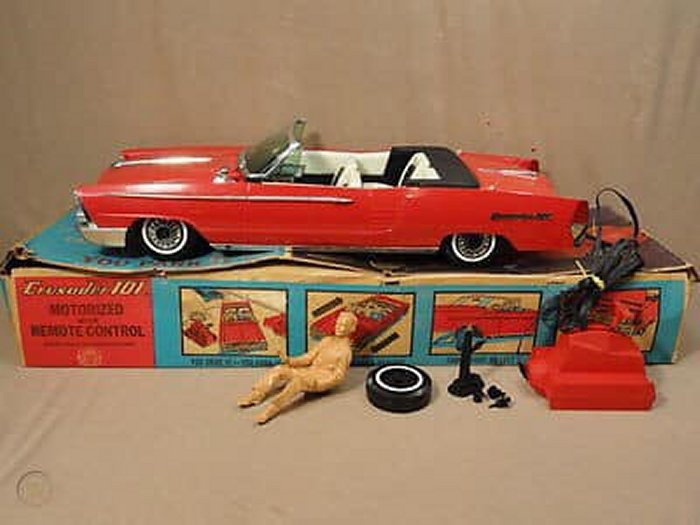 There he is, plain as day! 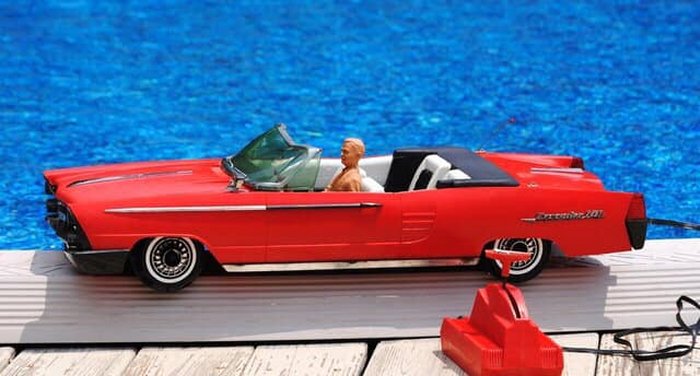 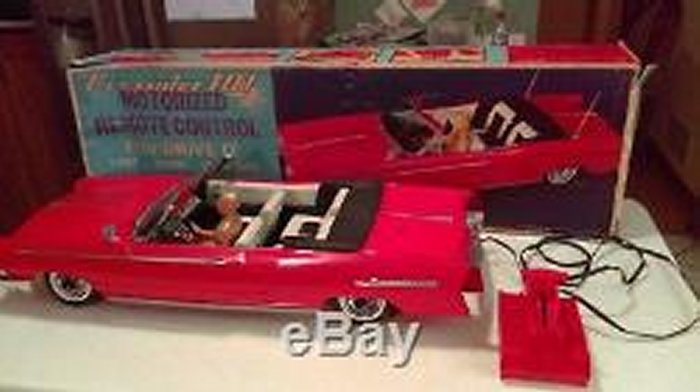 You gotta love the wonders of the internet.

Now I need to see if I can find a car the right size for this guy.  I don’t think I’m going to go after the Pontiac.