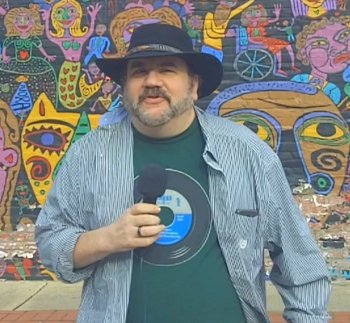 Just like we did last year, the final Sunday Evening Video of the year sees the debut of a BRAND-NEW video episode of Radio Free Charleston!

Also just like last year, it’s the only one we did this year.

You PopCulteer and humble host still hasn’t quite gotten the hang of shooting music video while taking loads of medicines for Myasthenia Gravis. However, things are looking up, as two of the songs in this show were recorded within the last four weeks.

This episode of the show, “Chess Records Shirt,” features music from Brooke Brown, The Velvet Brothers and, from Chicago, Alan Gresik and The Swing Shift Orchestra. We also have what I believe is the last bit of animation from the late Third Mind Incarnation, and a new dancing Batman, courtesy of Frank Panucci. 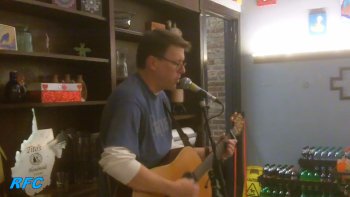 Brooke Brown is an old friend and former Gazzblogger who has become a formidable singer/songwriter. We caught up to Brooke just a couple of weeks ago at Gonzoburger, and both Brooke and Gonzoburger make their RFC debut, coincidentally on a show that is being posted on Brooke’s birthday!

Brooke treats us to a clever original tune called “Asking For A Friend,” and we hope to hear more from Brooke on future shows, and on the RFC radio show on The AIR.

Brooke has been performing regularly at Gonzoburger on Thursday nights, and you can check their Facebook page to see if that continues. You never know when Mrs. PopCulteer, Mel Larch, might jump and and join in on a song or two.

Our animation is “We Takin’ Applications,” which is the final bit of work we have left from Third Mind Incarnation, the chief creative force of which contibuted to our early shows, then feuded with us and made us cut out his cartoons, then fell ill and on his deathbed gave us permission to restore his old “Pentagram Flowerbox” cartoons to RFC, and to also use his other short films on the show. Then, as he asked me to say, he croaked. 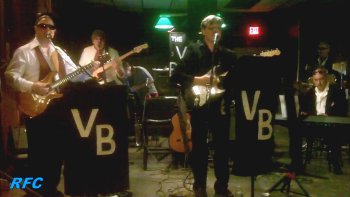 The Velvet Brothers are national treasures who operate on a local level. Jim, Greg, Bryan, Al, Craig, Dave and I’m probably forgetting a few are master musicians who specialize in the art of lounge music. They are the epitome of cool, and back in 2017 Mel and I caught them at The Cantina in Kanawha City, and posted a few songs online, outside of the context of Radio Free Charleston.

With this episode we go back to that night, and bring you their ulta-cool velvetty mutation of “Secret Agent Man.”

Playing us out this week is a rarity for RFC. It’s a band with absolutely no ties to Charleston. Earlier this month your humble host and his wife made a trip to Chicago and visited the legendary Green Mill nightclub. We chose to go on Thursday night because that’s the night that they have Swing Music. 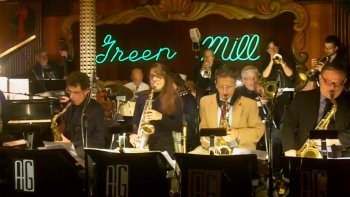 If you read PopCult regularly, or listen to The AIR, you know that, in addition to being a huge advocate for all types of local music, yours truly is a major fan of Swing Music. Charleston does not currently have any Swing bands, and I don’t see much chance of one forming any time soon (but if they do, I’ll be there), so to get a chance to hear a top-notch Swing band cut loose, we went to The Windy City. Besides, in Chicago this IS a local band, so there.

Alan Gresik and his crew put on an amazing show, and if we lived there, we’d go every week. They present the evening as if it’s a live radio broadcast from years gone by, complete with commercials and special announcements. The night we saw them they had a rotating crew of four or five singers and a tight and remarkably well-rehearsed 12-piece band.

Of course, I’m always armed with my trusty Kodak Zi8, and managed to capture a song or two before the dancers overwhelmed my view. We bring you “Drummin’ Man” to close out this episode of RFC.

Chances are, we’ll do at least two or three times as many episodes of the show next year, but for now, I didn’t want to go a calendar year without bringing you at least one new edition of Radio Free Charleston‘s video show.

Our host segments were recorded on December 30, 2018, the same day this post goes live, on Charleston’s West Side and in front of The Clay Center, after we discovered that it was “race your cars without a muffler down Washingto Street” day.  Our title shirt comes from Willie Dixon’s Blues Heaven Foundation.  Remember, you can catch the radio version of the show all the time on The AIR.