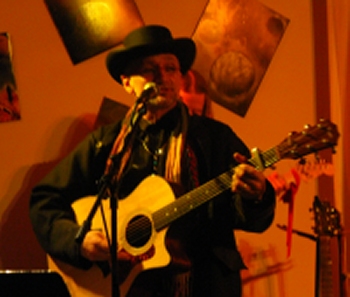 FestivALL 2011 had wrapped, but it still lived on here in the PopCult blog with part six of our exhaustive coverage.  In this week’s installment we revisit “Saint Stephen’s Dream: A Space Opera,” which was staged by WestVirginiaVille.com at the Unitarian Universalist Congregation last weekend. That is Douglas Imbrogno in the photo accompanying this post.

We bring you a bit of the beginning of Douglas Imbrogno’s magnum opus, and we mix in Austin Susman’s entry in the Silent Film Competition.  The show wraps up with Kentucky chanteuse Sasha Colette, performing in Davis Park. Our march through these eight FestivALL 2011 episodes of RFC continues next week, and later today we will be posting an extra rememberence of our friend, Jerry Fugate, who just appeared in this spot a few weeks ago.