Too Much Stuff For One Weekend 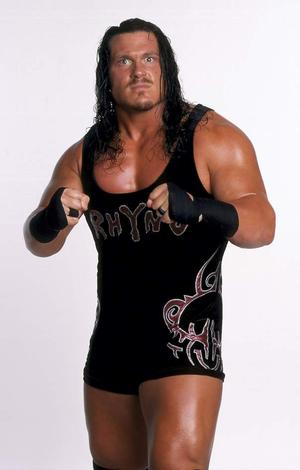 It’s another weekend where everybody decided to do everything at the same time in town, so your PopCulteer will do his best to dive headfirst into the events pile and come up with the trendiest catch.

IWA East Coast Wrestling makes its debut in Clendenin for some reason Friday night, and They’re bringing former WWE, TNA and ECW star, Rhino with them!

Invading Clendenin Middle School for the first time, IWA EC will present Rhino vs B.J. Whitmer, Mad Man Pondo vs. T.J.Phillips, plus action The Juggulator, Aaron Draven and more. Tickets are $15 for ringside, $10 for general admission, and there will be a meet and greet for an extra five bucks. The meet and greet is at 7 PM and Belltime is 8 PM. Clendenin Middle School is located at 107 Koontz Ave. in Clendenin.

Meanwhile, The Tom McGees are holding a benefit for…The Tom McGees, at The Empty Glass. This is to raise money for the band to record their debut album. You may have seen their heartfelt video (seen above again) in the latest episode of Radio Free Charleston. Here’s a sample of the band in action…

Joining The Tom McGees will be Dinosaur Burps, Three Chord Me, InFormation and The Concept. Read more about the band in Nick Harrah’s profile here.

Tonight is also opening night for The Color Purple. You can see three songs from the Charleston Light Opera Guild production of this cool musical in the latest Radio Free Charleston…

The Charleston Civic Center Little Theater is the site of the Charleston Light Opera Guild production of the musical version of “The Color Purple.” The beloved novel by Alice Walker was turned into a Broadway musical a few years ago by Brenda Russell, Allee Willis and Stephen Bray, with a book by Marsha Norman, and it is the spring offering from Charleston’s Light Opera Guild, opening May 4 and runing for the next three weekends, with a special Mother’s Day matinee.

You have three more chances to see the show that some people compare to “Seinfield.” Having played the title role last week, I plan to sit back and enjoy watching another interpretation this week. You can see “Waiting For Godot” May 4,5, at 8M and May 6 at 2 PM. Tickets are $15 for adults and $10 for Students and Seniors. The Alban Arts and Conference Center is located at 65 Olde Main St, Saint Albans.

Classic rock at The Corral Friday and Saturday. 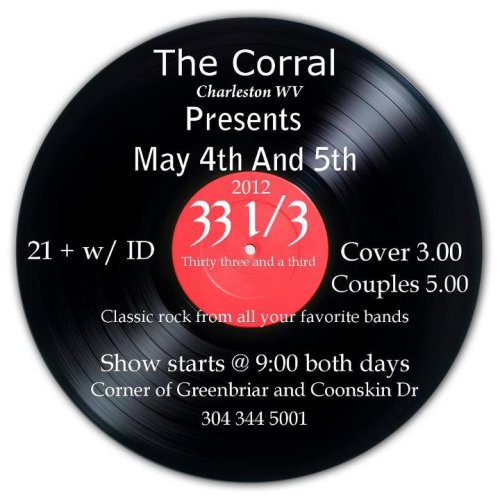 Saturday is a big day for The East Coast Metal Coalition to raise money for pediatric cancer research and treatment. The Bue Parrot is getting into the act The ECMC warm up kicks off at 10 PM Friday, with Born of Conviction, Play Dead, and Spiral Fracture. No cover is listed, but I’m guessing a five dollar donation gets you in the door.

In honor of “The Avengers” movie opening, May 5th is this year’s Free Comic Book Day. That’s when you can invade your local comic book shop and sample some free comic books from dozens of publishers. We know we’ll be stopping by Lost Legion Games and Comics The Rifleman in South Charleston, where the festivities will be happening all day.

May 5th has also been chosen as the day for the ArtWalk Spring Fling. All the ArtWalk galleries will be participating from noon to 4 PM and this is a good chance to check out all the exhibits that I told you about a couple of weeks ago here in the PopCulteer.

The Wood Boys bring ECMC’s annual cancer benefit for kids to Charleston for the first time. The plan, weather permitting, is to close down the street in front of Kanawha Players Theater and kick out the jams with a great lineup of bands. Five dollar donations will be accepted; there will be local craft booths with artists, games, and of course, loud rock music.

An ECMC afterparty, featuring Zeroking, Remains Un Named, and Survive The Demise, will happen at The Blue Parrot after the KP show ends. 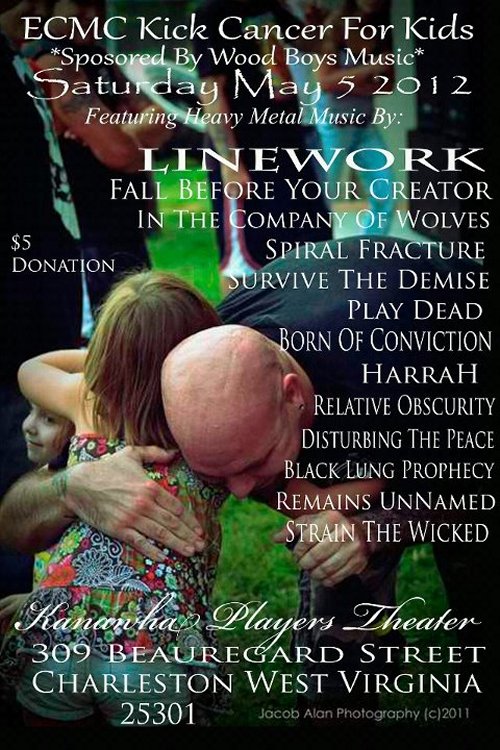 9 PM Saturday at the Walker Theater at the Clay Center, the usually family-friendly No Pants Players will give one of their adults only performances. This is not just improv comedy, it’s dirty, nasty, filthy, suggestive, sophomoric, disgusting, scatalogical, dirty, sensual, dirty improv comedy with some highly literary allusions thrown in, just to keep things honest. This show features cabaret seating and will have special alcoholic catering by Embassy Suites, so you can get good and liquored up while getting as raunchy as possible. Tickets are $15 and can be purchased at the Clay Center ticket booth or by visiting nopantsplayers.com, if you don’t want to risk being turned away at the door because the theater will probably be jam packed to the rafters with raunchy fans of dirty, dirty comedy. 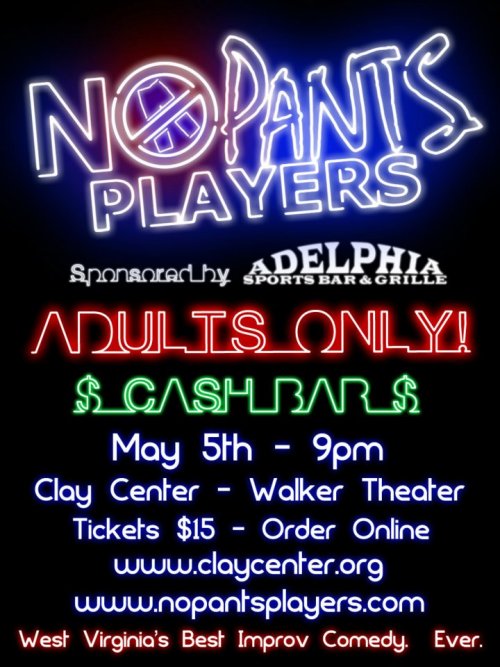 Godmode Broadway and Miniature Giant at Pat’s Bar and Grill 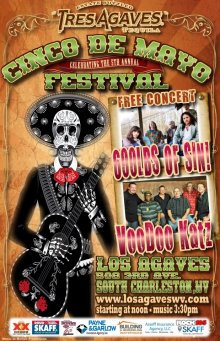 If you’re one of those people who likes to use any ethnic holiday as an excuse to overindulge in alcohol, then Saturday’s the day for you. West Virginia’s premiere Latin music band, Comparsa, will be taking over The Empty Glass. West Virginia’s premiere Latin bluegrass band, The Poor Taters, will set up shop at the Boulevard Tavern. And South Charleston’s premiere Latin tinged former Shoney’s, Los Agaves, presents a free concert outside, with two sets each by 600 LBS of Sin and The Voodoo Katz, starting at 3:30 PM. Ironically, although this is sponsored by Tres Agaves Tequila, no alcohol or drinks will be allowed outside where the bands are playing.

I voted early. I will not be able to go to the polls Tuesday and so, to do my civic duty, I went to the Courthouse and participated in the early voting. It went relatively smoothly, although the Courthouse policy of daisy chaining eight voting booths into one big circle meant that all of them were shaking violently as people were bumping them constantly while voting. But there was something very unsatisfying about voting early.

I came home, sat down to work on this very column, and I got a robocall, one of those automated recordings where some poor local candidate for office badly reads their poorly written voter spiel, not realizing that they have earned my eternal hatred.

Normally, I like to vote on the actual election day. The reason is simple: later that day, I realize I haven’t gotten any robocalls. I feel like my vote has accomplished something. It shut those bastards up. But this year, I had to vote early and for the next several days, my life will be interrupted by these poor, deluded fools and I will not have the chance to add them to my “never vote for this S.O.B. list.”

Which brings me to another rant. I have a few candidates for office as Facebook friends and many of them are gleefully posting about going out to “wave.” Or, they talk about spending the morning “waving.” I fear that somewhere, there may be some voter stupid enough to actually vote for somebody simply because that candidate waved at them. I’m guessing it doesn’t really happen that often.

In fact, I’m guessing that it works against them.

I remember a few years ago, I was driving down MacCorkle Avenue in South Charleston, when a deranged lunatic, waving a giant piece of cardboard, suddenly jumped into the path of my car. I had to swerve to avoid him, but I made note of what his giant piece of cardboard said, and swore I would never vote for anybody to hold a public office who was a big enough idiot to behave in such a foolish manner.

So I never did vote for Vic Sprouse. And since he is now a disgraced former politician, I hold that my initial impression was correct.

My first impression, whenever I see a politician standing out in the heat, or rain, or cold, “waving” is that they are a damned fool and they’re never going to get my vote. I’m willing to bet I am not alone in that regard.

That’s It For This Week

There’s your big weekend rundown. Your PopCulteer is going to attempt to hit as many of the above events as humanly possible, winding up at the Sunday matinee of “Waiting For Godot.” Radio Free Charleston is taking a one week vacation and will return May 14th, with an episode devoted to Liquid Canvas. Check back Sunday night for a bonus song from “The Color Purple,” presented as our Sunday Evening Video.